Founded in 1984 in Cincinnati, Ohio, Buffalo Wings & Rings stands out in the crowded casual dining segment by providing a club-level experience with better food, including fresh, never frozen wings, VIP views and its Buffalove® Service Promise that appeals to families and sports fans alike. With more than 80 domestic and international units, Buffalo Wings & Rings is changing the sports restaurant category, bringing elevated food and experiences that are accessible and affordable to all. 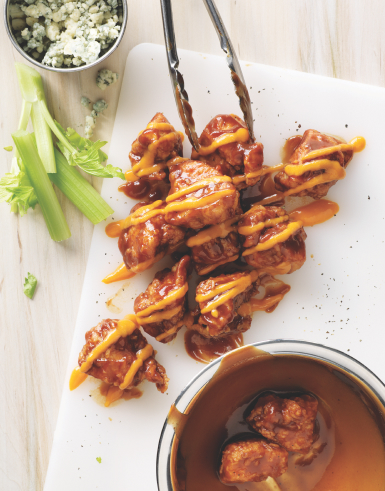 In2013, Buffalo Wings & Rings was at a stalemate. Not only did the franchise end the year with zero franchises sold, it had few leads and a slim development marketing budget. The franchise development team knew that if the brand was going to succeed on the national level, it needed to make a major change.

Mainland didn’t waste any time. We crafted articles to appeal to the brand’s ideal franchisees and hit the phones to pitch those stories to local and national outlets. We also designed an entirely new franchise development website for the brand.

Buffalo Wings & Rings’ performance has done a complete 180 since engaging with Mainland. In just their first year with us, the brand earned 600 leads and 17 new signed franchise agreements. The brand earned another 11 franchise deals the next year, 12 the next, and 8 the year after that. Today, Buffalo Wings & Rings’ momentum is still going strong.

The ability to target a specific audience is what makes Mainland’s AMPD technology unique. It ensures that brands like Buffalo Wings & Rings are making the most of their investment—it’s not just about the quantity of clicks an article racks up. It’s also about the quality behind those reads.

“When we apply the AMPD program to one of our articles on 1851 Franchise, we know that it’s going to make the most out of our money. The strategy behind it is more effective than anything else that I’ve seen—it gets the Buffalo Wings & Rings story in front of a large number of quality leads,” Schram said. “In the world of franchise sales, it’s all about being efficient with your budget. We need to be able to reach people who are close to making the decision to invest in a franchise, and Mainland’s AMPD program consistently makes that possible.”

There’s no limit to how specific an AMPD campaign can be—from targeting a group as generic as millennials to an audience as specific as sports fans between the ages of 30 and 55 who are making at least $750,000 a year, the tool allows brands to customize their target audience every time they create a new campaign.

That’s a feature that Buffalo Wings & Rings has taken advantage of to inform prospective owners of its opportunity in various target markets for development as well as update potential candidates of the brand’s impressive quarterly revenue increases and franchise growth.

By adding AMPD to its unique blend of services provided by Mainland, Buffalo Wings & Rings has elevated its presence not just in the franchising industry, but among consumers as well. The brand has become a household name—between its “Undercover Boss” appearance and interviews with major media outlets like MSNBC, The Wall Street Journal and Forbes, the brand is no longer under the radar.

“Buffalo Wings & Rings has figured out how to use Mainland’s one-of-a-kind resources to its advantage. 1851 Franchise gives the brand the opportunity to tell its story, and not just from a traditional PR perspective. We give them a platform and tool to narrate their entire development process. And our AMPD tool amplifies those efforts to get brand content in front of potential buyers,” said Nick Powills, CEO of Mainland. “There’s nothing else like AMPD in the franchise sales cycle. This tool ensures that critical information about your business opportunity ends up in front of qualified leads. By using 1851 and AMPD, brands like Buffalo Wings & Rings aren’t just telling their stories—they’re engaging their ideal target audience. At the end of the day, that’s what sells franchises and keeps brands on the path to future growth and success.”