Emerging Franchise Growth: How Mainland Is Helping Eggs Up Grill Grow From 24 Units to 100 In Just 4 Years

After first establishing it's why you/why now and building out a strategic franchise marketing plan, the PR and marketing firm secured $680,050 worth of third-party placements to support the breakfast-and-lunch franchise’s rapid growth strategy.

In early 2019, Eggs Up Grill, a then-24-unit breakfast franchise out of South Carolina, hired former TGI Fridays executive Ricky Richardson to help the brand achieve its ambitious growth goal of hitting 100 units by 2022. In his first two years with the brand, Richardson made substantial progress on that goal, reaching over 40 units by the end of 2020.

That’s quite a leap from the brand’s humble beginnings as a single restaurant serving breakfast, brunch and lunch to customers in Pawley Island, South Carolina back in 1997.

Eggs Up Grill was founded by Chris Skodras, who opened his shop with the modest goal of providing his coastal community with a great place to bond over delicious meals. Skodras quickly achieved that goal and much more. Over the following 11 years, Eggs Up Grill became such a hit that Skodras decided to franchise the brand to expand into new markets. After finding successful growth in three states, Eggs Up Grill was purchased by investment firm WJ Partners, who brought on Richardson as the franchise’s CEO. That’s when things really took off. 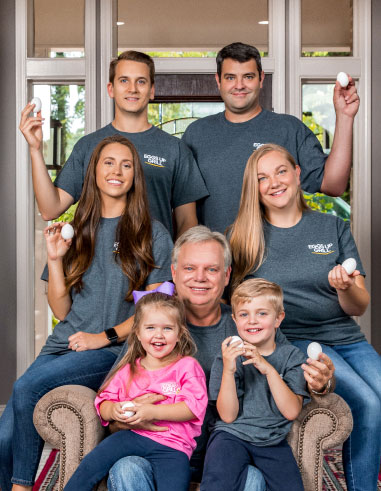 Richardson brought 35 years of experience in franchise restaurants to Eggs Up Grill, including 20 years with TGI Fridays, where he served as U.S. president and chief operating officer. But a growth plan as ambitious as Eggs Up Grill’s is a steep climb for even the most seasoned professional.

Richardson knew that his job wasn’t just to keep up the brand’s good work feeding hungry mouths, he needed to tell a new story about the brand to new audiences to help grow the franchise far and wide.

Eggs Up Grill has a number of strong selling points for prospective franchisees, including limited store hours and dedicated one-on-one support from the brand’s corporate team. But Richardson knew those selling points wouldn’t be enough to hit the franchise’s growth goals. The brand needed to tell a story that grabbed audiences’ attention and allowed them to personally connect with the brand.

Mainland worked closely with Eggs Up’s leadership team to identify the brand’s positioning, target audiences and strategize stories that would best connect with those audiences.

Mainland produced content that highlighted the success of existing franchisees, telling their stories in a way that allowed prospective franchisees to envision themselves as Eggs Up owners. Other stories highlighted the brand’s growth and the strength and experience of its leadership. Digital marketing campaigns targeted select franchisee prospects in growth markets while a broader media campaign kept Eggs Up Grill on screens, in print and on people’s minds.

Mainland took Eggs Up Grill’s best stories and placed them through its content marketing model (strategy > owned > earned > paid > data) , securing 39 third-party news media articles for the brand. Since July, 2019 the brand has seen more than 95,500 clicks/reads on content generated by Mainland.

To buy equivalent ads in those publications would have cost the brand $194,300. Using an industry-standard formula to calculate the value of the third-party articles, Mainland provided a PR value of $680,050 to Eggs Up Grill. Furthermore, the media exposure targeted specific growth markets like Charleston, South Carolina.

Not only did Mainland help Eggs Up Grill reach TV audiences in key markets, it helped the brand make a name for itself within the franchising industry. In 2020, FSRMagazine named Eggs Up one of the 12 restaurant franchises best-suited to outlast COVID. Richardson has been featured in industry mainstay Nation’s Restaurant News and is scheduled to appear on Franchising Market Radio.

With local media hits generating buzz for customers and prospective franchisees alike, and with Richardson positioned as an expert on the franchising industry, the brand is now signing more deals than ever, and the franchise’s leadership team is confident it will hit its goal of 100 stores by 2022.